A Trip to the Orchard, and Caramel Apple-Pecan Pie 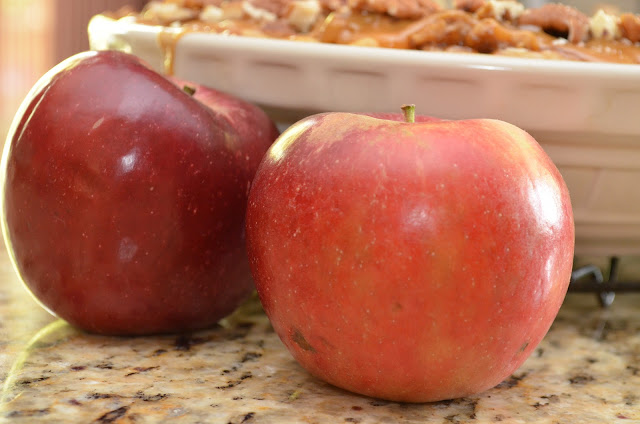 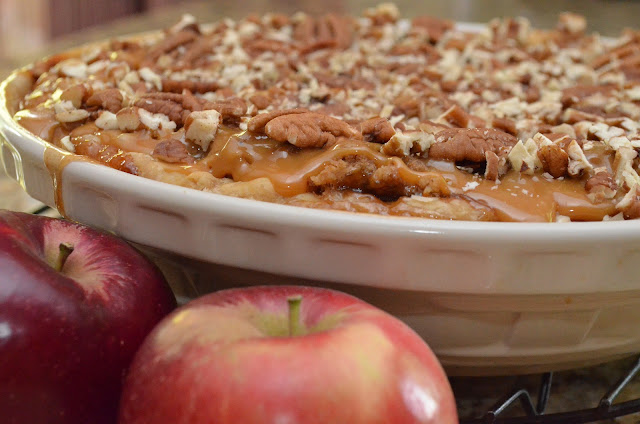 
Three quintessential flavors of Fall. Combined in a pie, they become decadent. This pie is so deeply rich and sweet; you’ll still taste it 364 days from now. And on the 365th day, you’ll make it again, just as I did on Sunday. (It may have been only 362 days since I made it last, but who’s counting…)


I love apple season. With the late Spring frost after the apple trees began blooming, I was rather concerned that there wouldn’t be any apples at the local orchards this year. While we haven’t been able to pick the apples ourselves, our favorite orchard does have their apples available in their store. So last week when my son had the day off from school, we headed to Center Grove Orchard near Cambridge, Iowa.


My kids love apples, too, but the draw for them at this orchard is not so much the apples. It’s The Farmyard. With a list of activities and “venues” much too extensive to mention, The Farmyard provides hours of fun and entertainment for kids big and small. A petting zoo, pedal carts, jumping pillow, and giant slide are just a few, and my kids’ personal favorite: the corn pool. 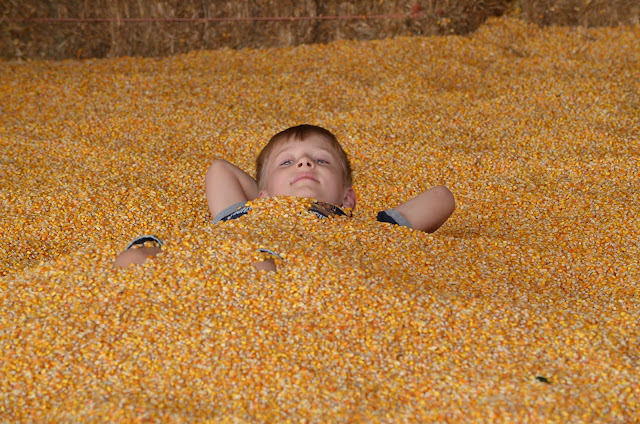 If it weren’t for the fact that millions or billions, quite possibly even trillions, of corn kernels had been dumped into a small arena and surrounded by straw bales, my kids would literally have ears coming out of their ears. (Get it? Ears. Of corn.)  While I didn’t find any corn in their ears, my daughter did deposit a kernel in the toilet as she undressed for the bathtub. She had corn absolutely everywhere. In places I didn’t know corn could reach. 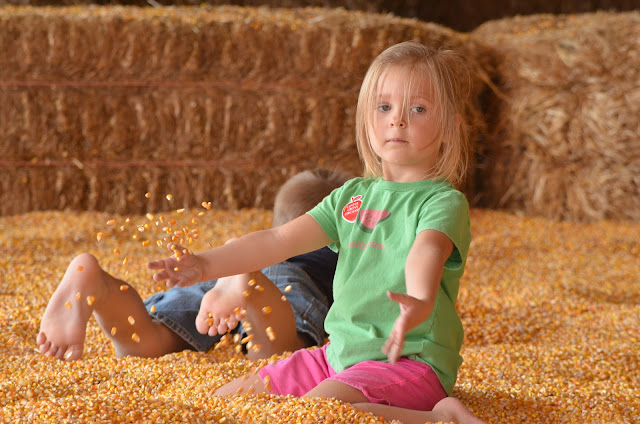 Corny jokes aside (get it? corn-y), my favorite part of Center Grove Orchard, when not picking their apples myself, is the store. This is where I get my pre-picked apples, cider, and cider donuts, among other treats. On this trip I came home with a half-peck of Empires (we love these for eating as well as for making applesauce) and a peck of Jonathans (my favorite for pie).


There are so many versions of apple pie, I could probably make an apple pie every week and still not exhaust all the options. In the next few weeks I’ll be making my favorite classic apple pie, but for now I wanted a change of pace, something a little more indulgent.


Teresa over at My Homemade Iowa Life had requested a caramel apple pie recipe, and the recipe I had in mind certainly fit the bill for indulgence. This pie really is one that I make just once a year, and it comes from the book Pie: 300 Tried-and-True Recipes for Delicious Homemade Pie, by Ken Haedrich (2004). If you’re looking for a helpful companion on all things pie, complete with detailed step-by-step directions, tips for success with each recipe, as well as anecdotes, side-notes, and background on the recipes, this book is so worth the money for its 639 pages. And like the title says, you get over 300 recipes, for every kind of pie you can imagine, and then some.


I’ll admit that I haven’t yet made very many recipes from this book. Yet. That’s one reason I started writing this blog. So in the weeks to come, you’ll likely be seeing several pies from the pages of Pie.


This week, it was the Caramel Apple-Pecan Pie (pages 229-231). Be forewarned, this pie takes a little time. It’s not difficult, but it’s not a pie that you can throw in the oven and walk away from for an hour. It will keep you in the kitchen for a while. (Any pie recipe that covers three pages is going to take some effort, but any pie recipe that covers three pages might be worth it. And this one is!) The caramel makes it indulgent, but the crunchy pecans (incorporated three times) knock this pie out of the park. Even my four-year-old daughter, who doesn’t like pecans, loved this pie. Her comment: “Mommy, I really like the croutons you put on the top. They’re so crunchy!”


Is it a crime not to tell her?


Ken Haedrich calls for using Golden Delicious apples, which I have used for this pie in the past. This time I switched it up a little in an attempt to lessen some of the sweetness, using half Golden Delicious and half Jonathan. The reliable Jonathans did not disappoint, nor did they overpower with tartness, and still allowed for a decadent pie. So if you’re in the mood for some rich Fall flavor, spend a little time in the kitchen, after a trip to the orchard, and indulge in this Caramel Apple-Pecan Pie. 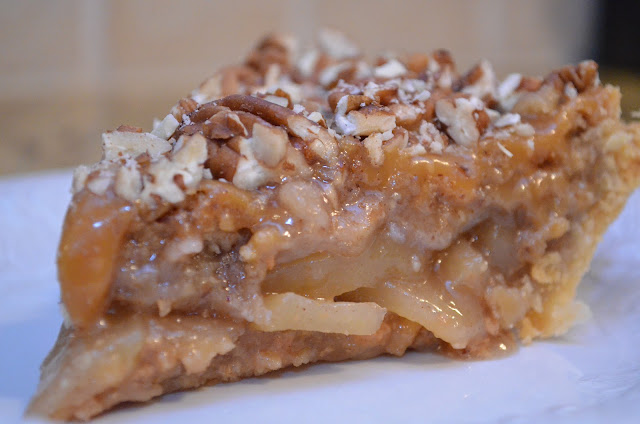 
Pastry for a one-crust 9” pie (deep dish will work fine, too)


7 c. peeled, cored, and sliced apples (I used half Golden Delicious, half Jonathan)


For the pecan crumb topping:


For the caramel and garnish:


Line pie plate with pastry and crimp the edges. Scatter caramel pieces in the pie shell and place in the freezer while preparing the filling. Preheat oven to 400°F.


Combine apples, brown sugar, and lemon juice in a large bowl. Mix well and set aside. Mix sugar, cornstarch, and cinnamon together in small bowl. Stir this into the apple mixture along with the vanilla. Scrape the filling into the chilled pie shell, smoothing the fruit with your hands. Cover edges loosely with foil or a pie crust guard. Put pie on center rack in oven and bake for 30 minutes.

Meanwhile, make the crumb topping. Combine flour, pecan halves, sugar, and salt in a food processor. Pulse several times, chopping the nuts coarsely. Scatter the butter over the dry mixture and pulse again until mixture resembles fine crumbs. Transfer to a bowl and finish combining with your hands to make damp, gravelly crumbs. Refrigerate until ready to use. (If you do not have a food processor, you can use a pastry blender for making the crumb topping. Very finely chop the pecans first.)


Remove pie from oven and reduce oven temperature to 375°F. Carefully dump crumbs in center of pie, spreading them evenly over the surface with your hands. Tamp them down lightly. Return pie to oven and bake until juices bubble thickly around the edge, 30 to 40 minutes, or longer.


Transfer pie to wire rack to cool for about 1 hour.

While the pie is still warm – approaching the 1-hour mark – prepare the caramel. Combine butter, water, and caramels in the top of a double boiler. Melt caramels over (not in) barely simmering water. When melted, whisk mixture until smooth, and then drizzle caramel over entire surface of the pie. Immediately press pecan halves into caramel, then sprinkle chopped pecans over the top. Let cool several hours before serving.
Posted by Mindy | Pie on Sunday on Monday, October 01, 2012
Email ThisBlogThis!Share to TwitterShare to FacebookShare to Pinterest
Labels: apple, fruit, nuts

Mindy | Pie on Sunday
Iowa
Determined to prevent my family from enduring the hardship of a life lived without pie, I'm making a pie every week while continuing to master the art of pie baking. Join me as I share some recipes for Pie on Sunday.